Coast Capital needed a transformation tool to support their expansion from a regionally based credit union to nation-wide organization.

With an expansion from a regionally based credit union to nation-wide organization, Coast Capital was looking for a transformation tool that would also upgrade their 2002-era intranet.

It took a major organizational turning point - the leap from provincial to national credit union - to propel them to move their intranet to the cloud. But, this turning point was also a time when every Coast Capital resource would be stretched thin. So they were looking for a way to keep employees engaged and productive during this time of growth. According to Todd, “we needed to elevate our intranet to become a true strategic asset.”

So Todd and his team turned to Habanero.

“We’re a Microsoft shop at Coast,” says Todd. “So, we knew SharePoint would be our backbone, but this was our first big enterprise-wide push into the Microsoft cloud. We wanted to partner with someone who had mastery-level expertise with Office 365.”

Maintaining a superior customer experience through their growth was a top priority. Coast’s employees – many of whom were supporting customers – would need a seamless transition to the 14,000 web pages, 18,000 documents and 65,000 links that made up their intranet.

“Manually moving that much content in a short time frame was just not humanly possible. This was especially true for Coast employees, who were spending their time focusing on the organization’s transition” says Habanero project manager Lori Sokoluk. “We helped Coast create an automated migration approach. In the end, we migrated 100% of their existing content to their new location using migration scripts.”

“Habanero’s lead migration developer Mike was super human,” says Todd. “We called him Magic Mike! No matter what challenge came out of the woodwork, he came back with a good solution.”

To complement the migration, Habanero helped Coast evaluate areas that required updated or new content and created a strategy for maintaining content so their intranet will continue to perform as a solid productivity tool.

While reliable content was critical to Coast Capital’s new intranet, so too was creating a new modern experience that was easy to access.

Coast saved months of development and customization time by starting with GO’s built-in capabilities. GO features, such as the People Finder and My Toolkit, helped Coast take a leap in the employee experience from their previous intranet.

Will Hardy, Habanero’s lead on the project, explains that this is one of GO’s key benefits: the result of several decades worth of research and intranet implementations, GO anticipates pain points based on our consistent requests from customers.

“With GO, you benefit from the conversations that many others have had before you,” says Will. “Why reinvent the wheel? Starting with a product also lets you start small and grow, especially when you’re driven by tight deadlines.”

“Habanero has a cupcake-to-wedding-cake visual metaphor,” Todd says. “So much of what Coast has done in the past is try to craft the perfect wedding cake all at once,” says Todd. “Habanero brought the cupcake. We’ve defined what the cupcake looks like, and we’ll keep moving toward our wedding cake, one layer at a time.”

Keeping an eye on the prize (or the priorities)

Intranets built on GO also include regular upgrades, which allows companies such as Coast to continue to experiment with new features and ensure the intranet continues to grow in value.

Making incremental steps not only makes an intranet more manageable, but it also makes the intranet budget more sustainable.

For keeping project costs low, Will credits Todd’s unwavering focus on priorities. And Todd, in turn, nods back to the Habanero team.

“This was a total team approach. [Project Manager] Lori was an absolute master at reining us in and keeping us on track. I really can’t sing their praises enough. Under Will and Lori’s leadership, we did an exceptional job.” 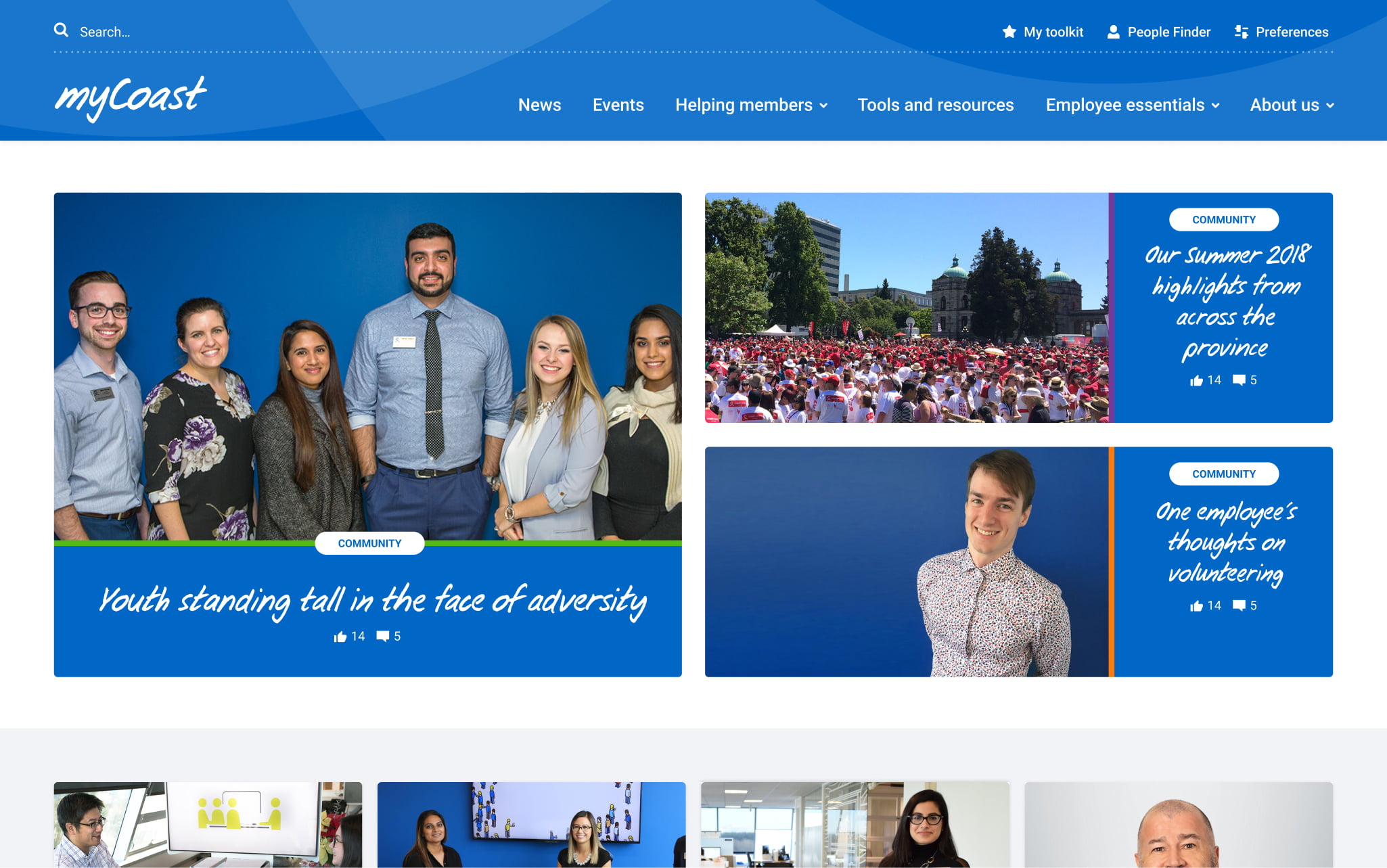 How was the new intranet received?

Intranet launches are always exciting, and the team is always holding their collective breath to see how the new intranet will be received. We knew by the end of day one.

The launch of myCoast in March 2019 generated an overwhelming amount of employee engagement and positive feedback from all corners of the organization.

At the end of the first day, Todd sent Habanero a note with some of the day’s stats and feedback:

Some of our favourite testimonials:

“I can see from using this site for a very short period of time that it is going to make my job a lot easier! Thank you to everyone involved in this project, I can only imagine the amount of hours involved. SUPER BIG HIGH 5 to you all!”

“Game changer for the way we do things. Wow! Can hardly wait to get going on the new platform” 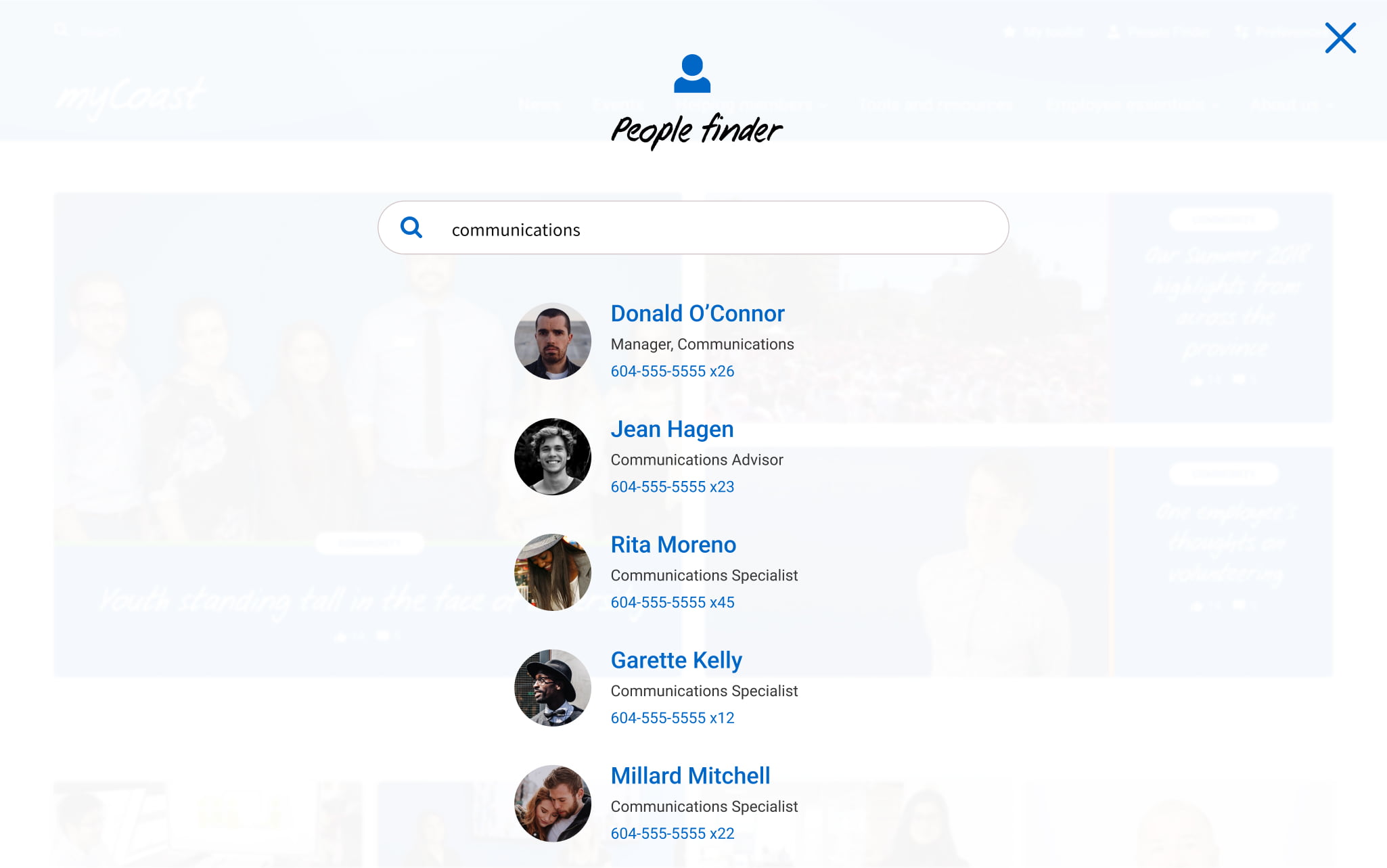 “Massive improvement in terms of customization, the ToolKit, People Search and the ability to like and comment on items using a personalized profile with picture and all. Definitely adds a sense of connectivity between all of the employees. Millennials will feel right at home with the social media inspired platform. Overall as far as initial launches go, I would say this is a massive success! Bravo!”

“To whoever made the new MyCoast, I’m going to be honest, when I saw the new MyCoast launch coming up and fast I was a little nervous for the kinks along the road. Yet there isn’t any! It’s fast and easy to navigate and updates the newest forms to the top which is a life saver and huge time saver. Big fan of the new system!” 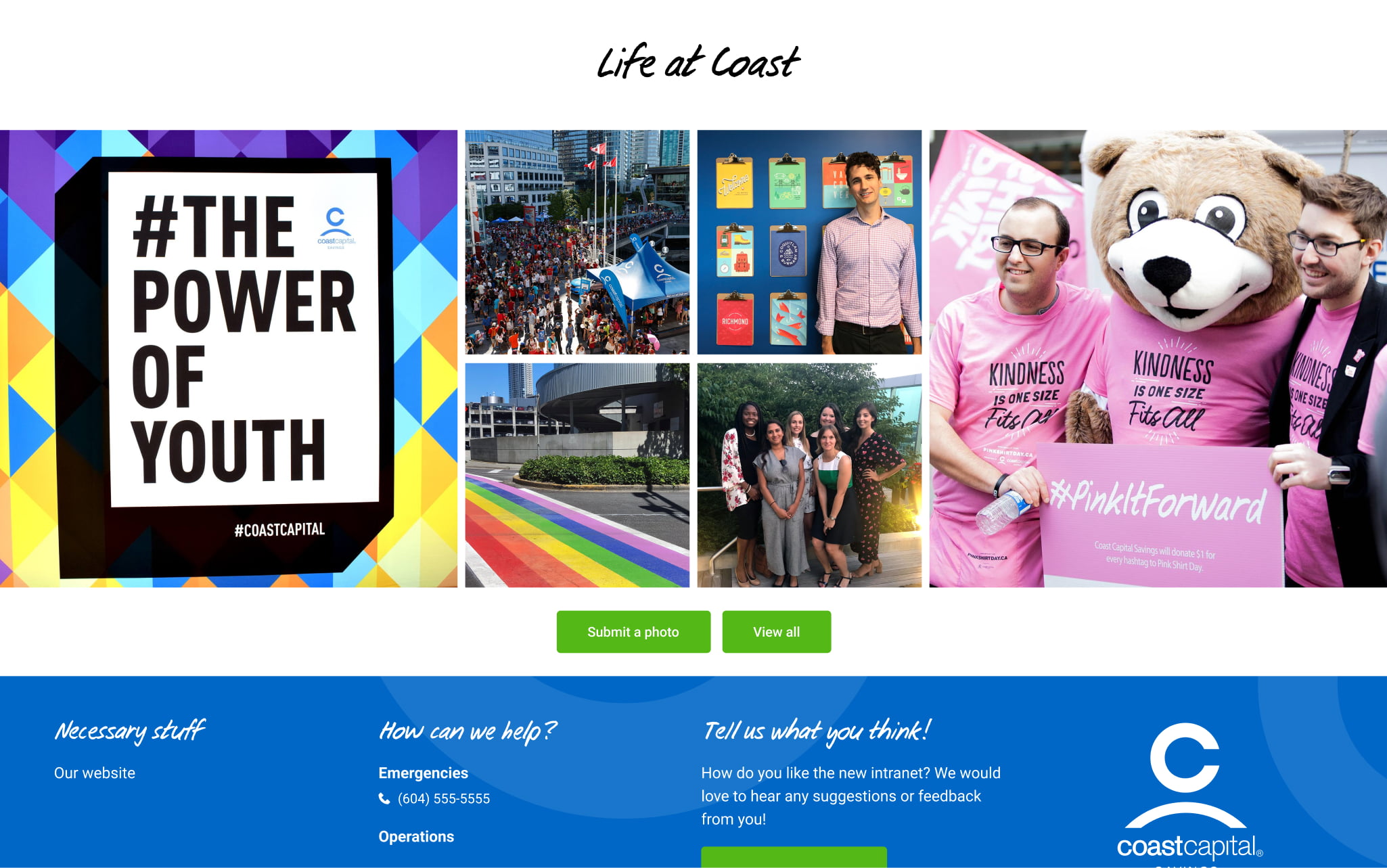 “You guys killed it. Love the layout and that I can change preferences instead of trying to just filter through and look for what applies to me. Photos are so engaging, especially of ‘life at coast’. Makes me so excited and proud to work here.” 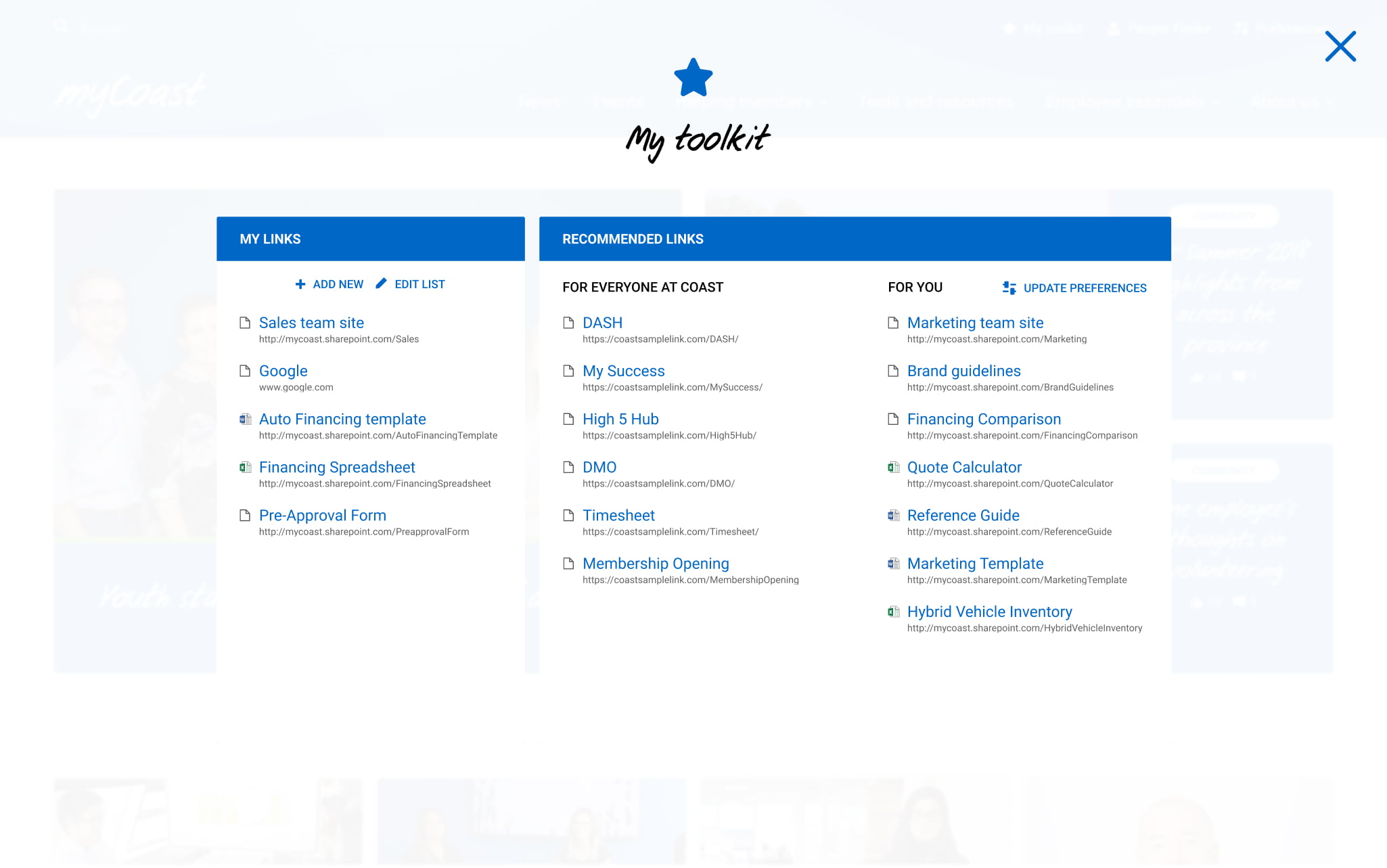 “I’m loving the “My Toolkit”. It is like one stop shopping…..I’m able to put all my frequently visited MyCoast content pages in one spot. Then once I add all the ones I wanting in My Toolkit I loved that I could re-name them and even better that I could shuffle the order. Putting the ones I visit the most at the top.”

In his email, Todd added to these testimonials with his own: “Much of the success we had yesterday was a direct result of Habanero’s deep collective expertise, experience, perseverance and all-around super-human talents.”

Thanks Todd and everyone at Coast Capital! We were so excited to see how the new GO SharePoint intranet was being received and, even more importantly, used.