To rapidly connect employees to their coworkers, communities, and organizational goals.

An intranet accessible on any device, anywhere, so employees can focus on collaboration, not connectivity.

Keeping 12,000 WestJetters connected in the cloud

Why we created GO

Some companies slow down as they approach big milestones, pausing to catch their breath after, say, the last 90 years. Others, like Barton Malow, glimpse the future and say full steam ahead.

The company aims to double efficiency by its centennial year, 2024. Dana Galvin Lancour, Senior Director, Marketing & Communications, explains that in true Barton Malow fashion, achieving this goal depends on connecting people to each other and the communities in which they work: “We are very much a people-first company. One of our core values is empowerment. We want to have what we need to do innovative work so that we strengthen our communities.” Where Barton Malow employees don’t have tools that equip and enable, success depends on promptly getting them.

Looking ahead, Dana saw a significant opportunity in the role the company’s intranet could play in supporting collaboration and innovation. But in her experience, “intranet redesign” and “prompt” were paradoxical terms. Habanero Vice President Ben Skelton doesn’t blame her: “The old way of building an intranet was you’d spend a ton of money and time, watch it die, and then do it all over again three years later.”

Upon meeting us, however, Dana quickly learned that we had a fresh approach on the age-old dilema. “When I met Brian and Meghan in their workshop at an Advanced Learning Institute conference, my first thought was they are the best thing ever. Their process and mindset aligned with who we are as a company, and I got the sense that they really knew what they were doing.”

On the ground with the Barton Malow team in Michigan, we learned more about the company’s goals and the many time-sensitive projects supporting them. That’s why we suggested GO.

“Essentially, Go is a foundation that we built based on 20 years’ worth of best practices,” says Habanero consultant Meghan Armstrong. “It’s a component-based intranet that we tailor to your needs, and we do it in less than 10 weeks.”

“Habanero could’ve sold us a custom intranet, especially because that’s what we thought we wanted. That kind of project easily would have cost us two to three times more. But Meghan and Brian listened to us. A big budget wasn’t their concern. They knew that GO would give us a solid foundation to build on and that we would get to our desired outcome faster and more economically,” says Dana.

And that’s exactly what we did.

Barton Malow’s old intranet, called Dirt, was slow, inaccessible to field workers, and made information hard to find, says Dana. “Like a house over the years, it took on a bunch of stuff without cleaning anything out.”

Requirements gathering tuned us in to employees’ unique needs. Given the company’s distributed workforce (more than half of their 2,000 employees are deskless), convenient mobile access was a top priority. So was people-finding: in addition to being spread across numerous job sites throughout North America, Barton Malow employees also work out of 15 offices in 10 states. “We wanted people to find their fellow employees fast,” says Dana.

We launched with features that aim to solve these important problems.

The move to SharePoint Online made the new Dirt accessible to anyone on any device anywhere, a must-have for Barton Malow’s more than 2,000 field workers. 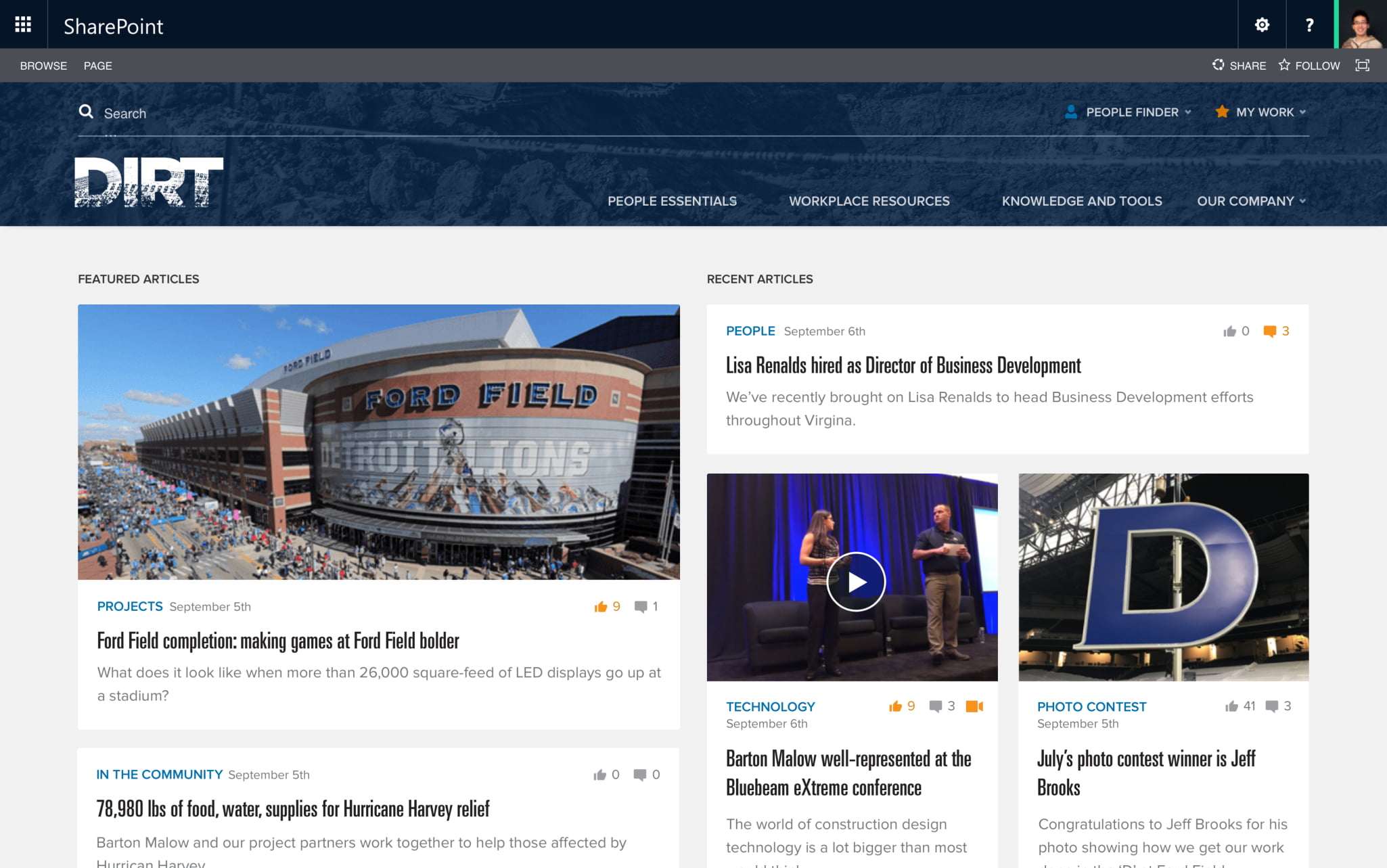 The homepage is all about connecting day-to-day decisions with goals and priorities. News, which can be commented on, is prominently featured. Metrics communicate success measures. The integrated Yammer feed supports relationship-building and story-sharing. 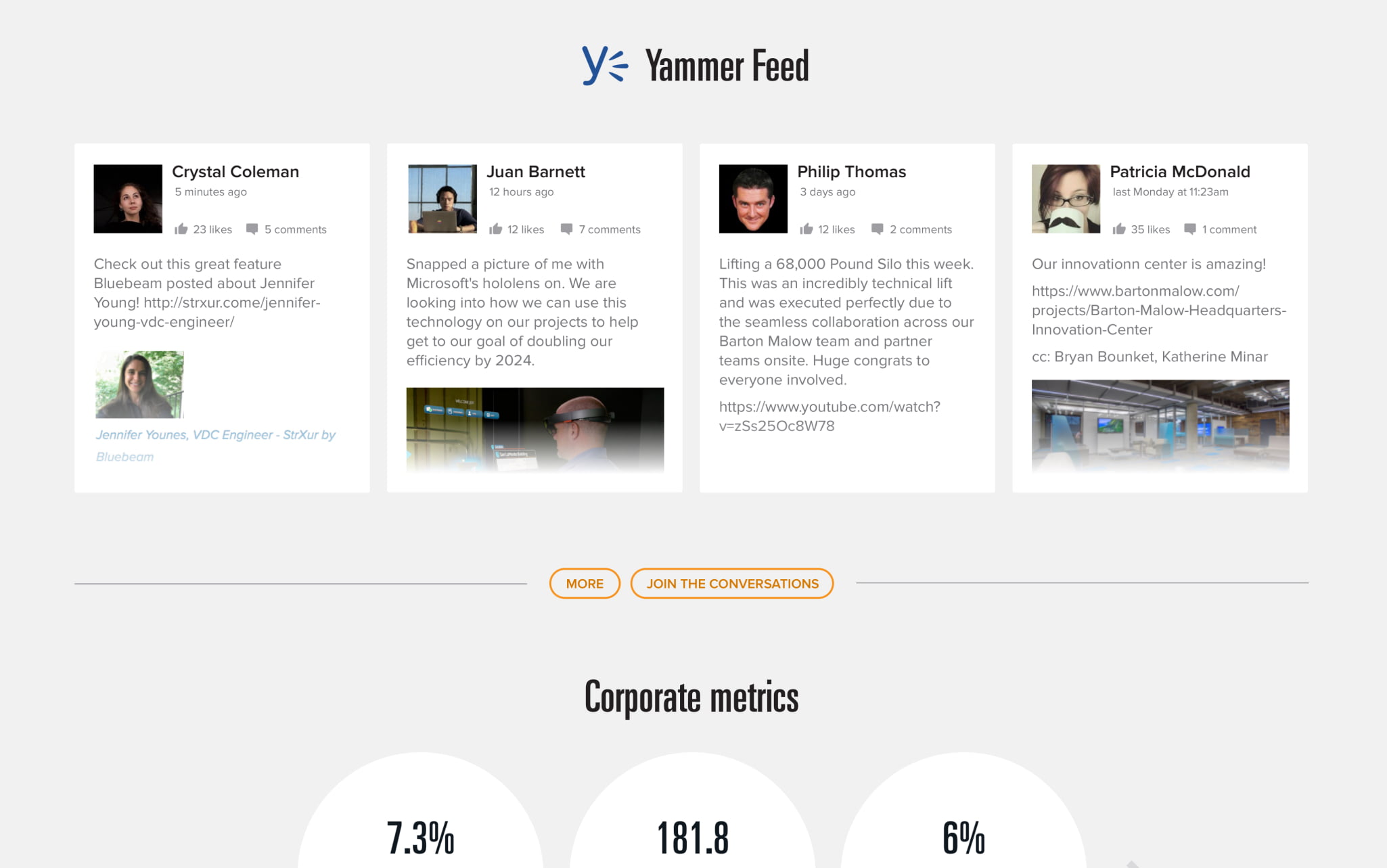 The old Dirt’s most-used feature was its personnel directory, and so transforming it was one of my passion projects,” says Dana. The new People Directory offers look-up by name, region, office, department, project, or job title. “We can even do a reverse look-up by phone number,” Dana adds. 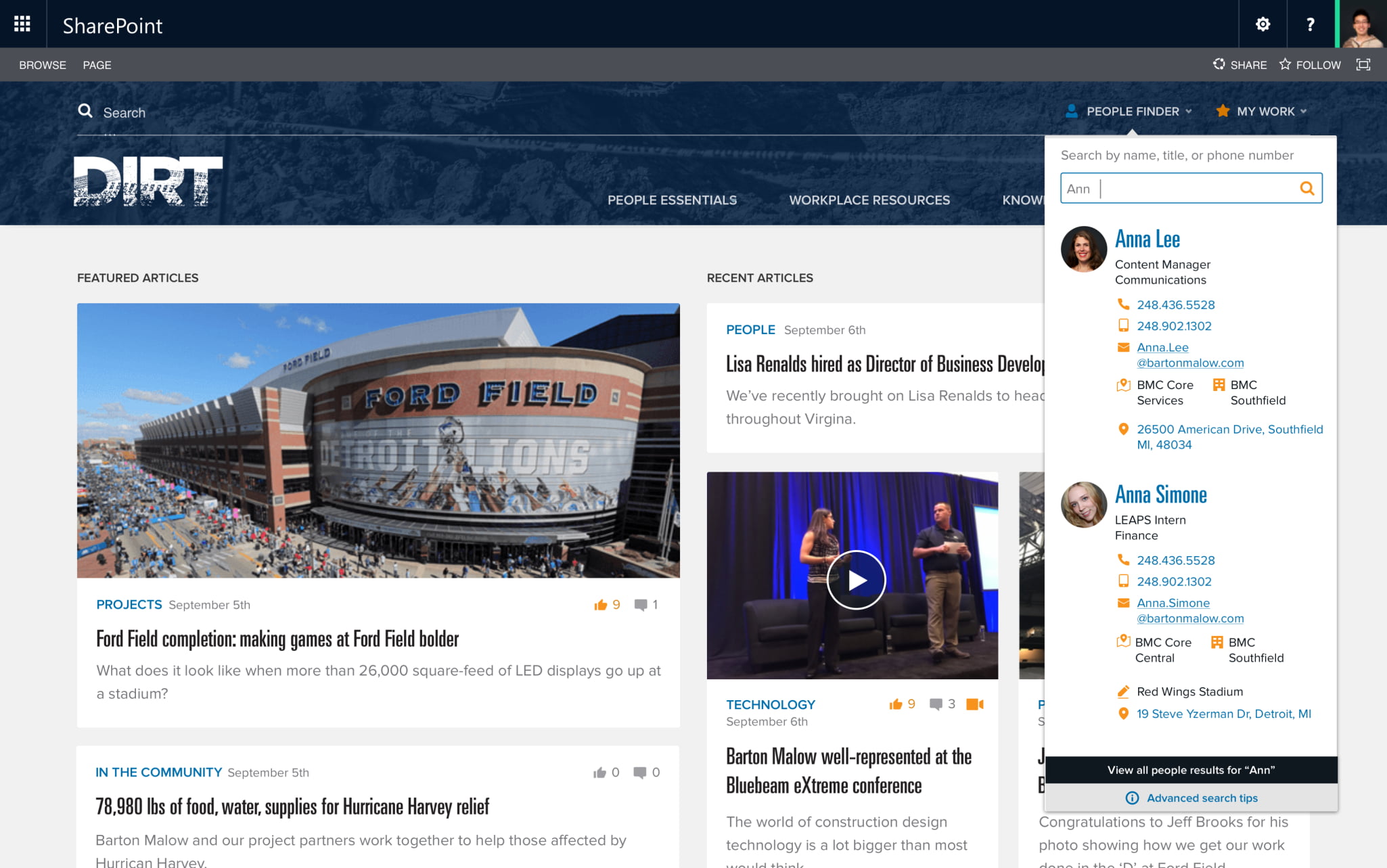 Dirt needs space in which project teams can share lessons learned (e.g. how to cure concrete on a rooftop) with each other, but it’s not yet clear where that space should live or how it should look. Fortunately, yet-to-be-made decisions are fully supported by GO. “GO doesn’t lock you into a limited roadmap of features,” says Ben. “It can be evolved or extended after launch, which isn’t the case with a lot of out-of-the-box products. GO intranets get upgrades twice a year, so it’s easy to keep them fresh because the Habanero team is constantly innovating in the product and creating new features that make sense for our clients.”

The new Dirt is seriously dug

Just a few months after launch, the new Dirt is being seriously dug. And while employees are getting their hands Dirt-y, Dana is still celebrating how clean a project this was.

“The experience we had the last time we redesigned our intranet and the experience we had this time are like two different worlds,” says Dana. “Habanero put so much testing and care into the product before we even got it, and when we did get it, it just worked. After only 10 weeks, it was solid. I never could have predicted that.”

“I’m such a Habanero fan right now, and this intranet… I don’t even know how to describe it. It’s… it’s bang-good,” she says, laughing. “Bang-good. How’s that for a quote?”