From snore to score: Sleep Number modernizes intranet with GO

The challenge: To design and promptly launch an intranet reflective of Sleep Number’s high-tech, high-touch identity.

The outcome: An intranet that has “not only made the communications team way more efficient, but also showcases who we are as a digital company. It’s what future talent entering the company expect from an industry leader. And it makes us proud.” - Leah Guimond, Senior Manager, Communications, Sleep Number

Webinar: Go behind the scenes of Sleep Number’s intranet

Building your intranet in Office 365?

For Sleep Number, 2017 was a year of transformation.

The company, an innovator in sleep products and technology with more than 550 stores across the U.S., changed its name, kicked off a new product line, and moved its headquarters from the suburbs to downtown Minneapolis. With much growth and change, the company went in search of better ways to build community and connection. “Our old way of communicating wasn’t going to work,” says Leah Guimond, Director of Corporate Communications.

The time was right to move forward on a project that had stalled for years: a new intranet. Sleep Number’s existing intranet was built on ColdFusion and had no content management system. Anyone who wanted to update it had to know code. In practice, this led to a static site, an over-dependency on email and word-of-mouth, and a digital experience that didn’t reflect the company’s brand.

“When people explore the idea of working with us, they see we’re a connected and high-tech, high-touch company. We wanted our employee experience to reflect who we are and what people anticipate,” says Leah.

A decision to transition employees to Office 365 in tandem with the headquarters move prompted the corporate communications team to take ownership over the intranet. They committed to designing a more connected, digitally-empowering employee experience. But how? What would it look like? And what should it look like? The team had key questions they didn’t know how to answer.

Leah took to Google. “I found Habanero’s white paper. It was easy to read. It made sense. I scheduled a demo, and I felt like they really understood what they were doing.”

We showed them GO, our intranet accelerator based on 20 years of best practices. “GO isn’t a typical out-of-the-box solution,” says Leah. “I was really drawn to creating a strong foundation that we can customize as little or as much as we want. I also loved how GO elevates news, making for a more connected employee experience. And it makes so much sense to be able to pick and choose modules that support our specific strategies.”

“Habanero created GO because a lot of what companies want from an intranet is similar: communication,” says Angela Chen, Habanero interaction designer. “GO gives you a head start. We can get the common things out of the way and then focus on your organization’s specific needs. And if GO can’t meet your specific need right now, we can focus some energy around making that happen quicker and at a lower cost because you already have your baseline product.”

With GO, Sleep Number also decided to use our Quick Start approach. Quick Starts are carefully-managed, GO-based projects that are completed in as little as 10 weeks. Each week has specific targets. For example, week 1 is an immersive research experience when we are on-site to learn as much possible through activities such as stakeholder interviews and listening labs. During week 2, we translate research findings into the intranet’s information architecture and roadmap. Weeks 3 through 7 see us focusing on design, and that’s followed up with quality-assurance, user-acceptance testing, and training.

“We were so fortunate to have Habanero. They guided us through each of the Quick Start steps and kept us on track and on budget,” says Leah.

Summarizing what the team achieved in just 10 weeks, Leah puts it like this: “Our new intranet, called The Wink, modernizes the way we communicate. It significantly reduces emails sent, has become a visually rich news source, houses many documents and resources, and provides access to tools and other systems. It is also a place for team members to feel inspired by our company and culture.”

Here’s a look at some of The Wink’s features:

Flexible and robust, news allows the communications team to display up to three feature articles “Communicators have the ability to choose which featured article occupies the most real estate, so they can emphasize what they want,” says Angela. 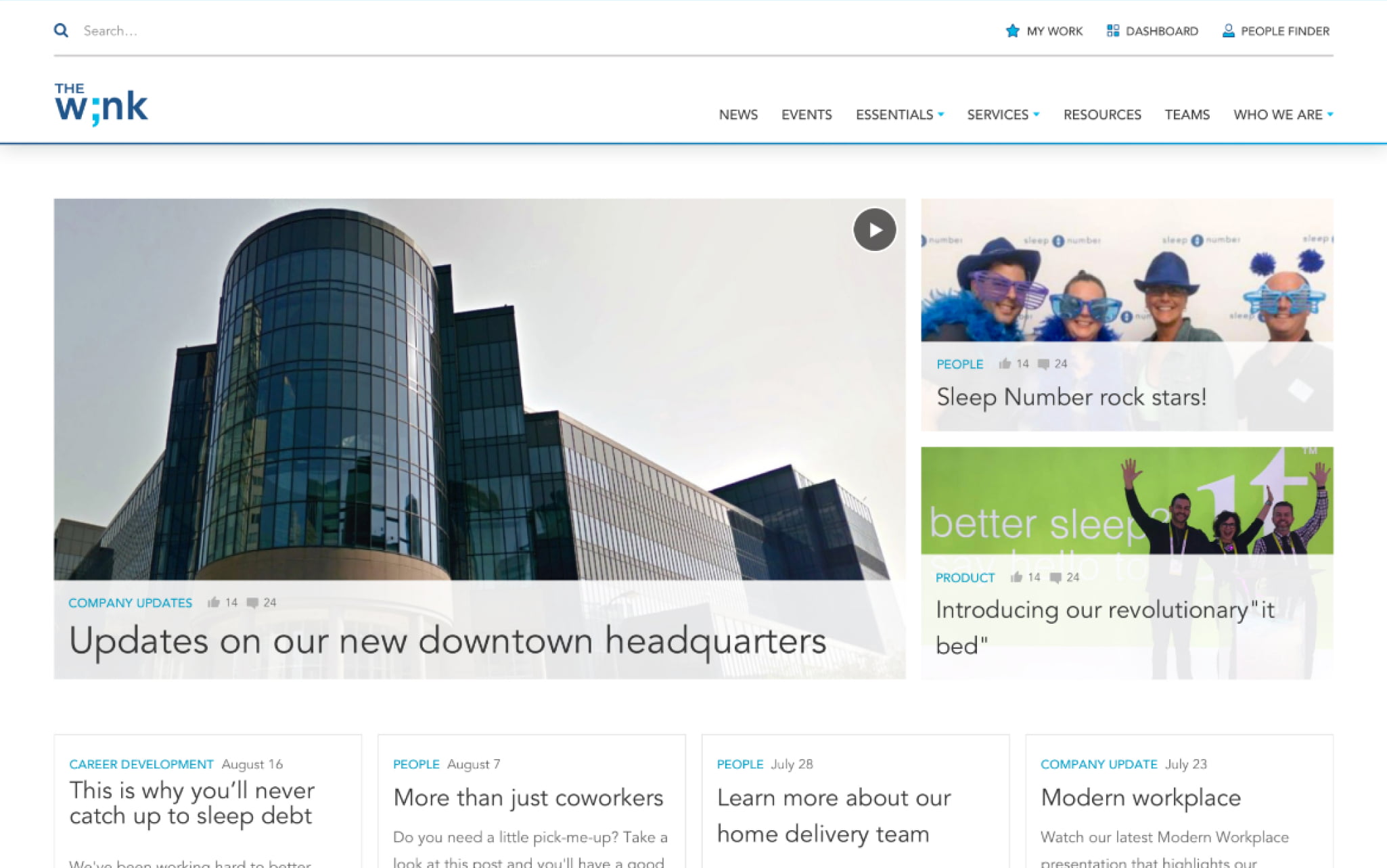 The Wink’s information architecture is task-based, not owner-based. “This means that content is organized around helping the end-user achieve the specific task she set out to achieve. She doesn’t have to know who owns what,” says Angela.

Previously, Sleep Number had a static HTML site. Now, says Angela, “People can create content pages way more easily, creating and editing content in rich text. There are pre-defined styles for heading, text, embedded images and captions to ensure consistency across the site. The overall process is just way easier than what they had before.” 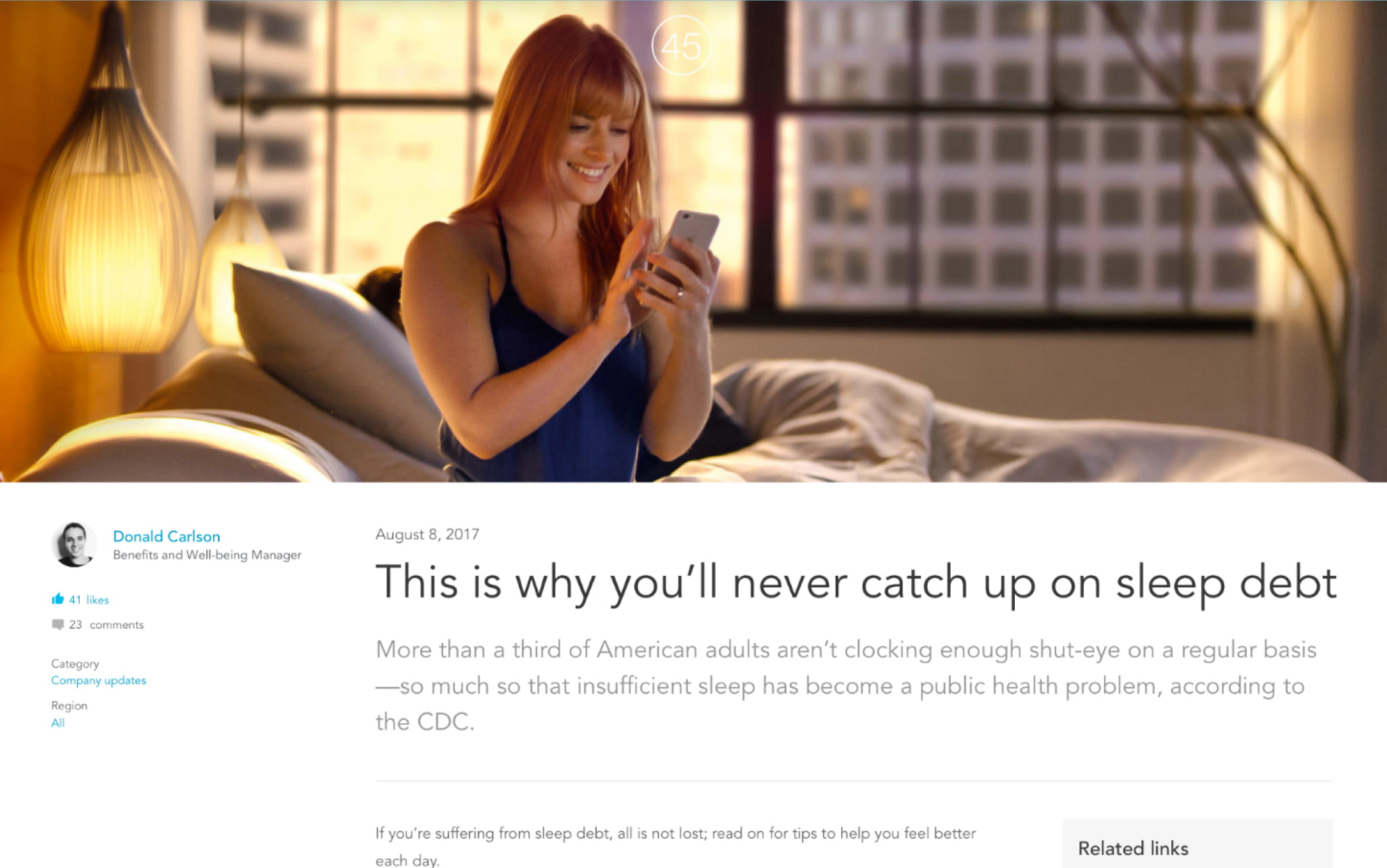 The Wink “showcases who we are as a digital company”

On top of getting successfully to the initial launch, Sleep Number’s Quick Start project mapped out subsequent project phases. “Habanero helped us define the scope for this launch and also for future phases. They helped us build a roadmap that shows future upgrades that encompass our goals and strategies,” says Leah.

“GO can be evolved or extended after launch, which isn’t the case with a lot of intranet-in-a-box products,” says Ben Skelton, vice president at Habanero. "GO intranets get complimentary upgrades twice a year, so it’s easy to keep them fresh because the Habanero team is constantly innovating in the product and creating new features that make sense for our clients.”

Six months post-launch, Leah says that The Wink’s adoption and use have been high. “Don’t underestimate how a new intranet can change a culture,” she says. “Not only has it made the communications team way more efficient, but it also showcases who we are as a digital company. It’s what future talent entering the company expect from an industry leader. And it makes us proud.”